How a Trip to Guatemala Solidified my Belief in Grassroots Grantmaking 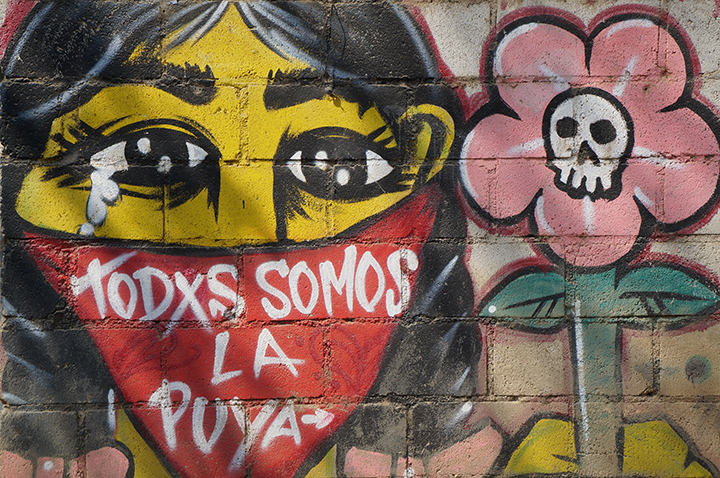 Artwork in the La Puya resistance camp: “We are all La Puya.” Photo by Keri Kae Almstead.

John Peterson has been a supporter of the Fund for Global Human Rights since 2014. Last February, he joined the Fund on a trip to Guatemala, where he met with Fund grantees working to protect the land rights of indigenous people, end entrenched corruption and impunity, and promote women’s rights.

“So this is what a rural town in Guatemala looks like?” I thought to myself.

It was the second day of our trip, and we had driven an hour or so north of Guatemala City, the country’s capital. I remember the pavement disappearing as we took a side road, then rolling to a stop near a row of makeshift buildings.

Our destination turned out to not be a town at all. Known locally as La Puya, it’s a resistance camp made up of men and women from nearby communities. They set up shop in 2012, when mining companies began encroaching on their land without their knowledge or consent. The Fund for Global Human Rights has been supporting the movement since it began.

There were 20 to 30 people at La Puya when we pulled in with staff from the Guatemalan Human Rights Defenders Unit (UDEFEGUA), a long-time Fund grantee. I remember being struck by how grateful the protestors were to see us, and how eager they were to tell us their stories.

It all began in 2011, when a mining company showed up to survey the land and talk to nearby homeowners, the vast majority of whom are small farmers. The surveyors said they were there to help the farmers grow better crops, but the farmers grew suspicious when the company started taking pictures of their property. Alarmed, they went to their county mayor to ask him what was going on. He said he didn’t know anything about the company—that he had never heard of or spoken to them.  But he was lying. Shortly after the community approached him, someone slipped them a videotape. It clearly showed company officials making a presentation to the mayor and the local council about a gold and silver mine they were planning to build. The farmers were upset—not just because they had been lied to, but because they knew that in Guatemala, mines often pollute local waters and farmland. Their instincts were spot on: in addition to encroaching on their land, the mining company was prepared to use cyanide leaching to extract gold, a method known to cause major pollution and devastate water supplies.

As the communities discussed a plan to resist, the mining company began its work. After midnight one night, a woman spotted mining machinery coming down the road. It was the company. Moving swiftly, she blocked the road with her car and called the area farmers to come quickly. Within an hour over 50 people had shown up. Their quick action in the dead of night led the people driving the equipment to go back from where they came.
Knowing they would be back, the community members set up a 24/7 road block. By the time I got there in 2017, They had maintained the blockade for five years. And it was clear that they weren’t planning on leaving anytime soon.

The local authorities did not make the communities’ resistance easy. During the first months of the protest, police showed up on several occasions and threatened the people manning the blockade. They even tried to bait them into using violence so that they could arrest them. Amanda Alvarez, 30, from El Guapinol, has been a member of the La Puya peaceful anti-mining resistance since its inception in March 2012. Here she poses for a photograph at the camp’s kitchen while holding her two-year-old son Anthony Aquino. Photo by James Rodríguez.

With deep ties to grassroots groups in Guatemala, the Fund learned about the escalating situation in La Puya in real-time and responded by swiftly dispatching grants to several organizations that could help them push back. These groups included UDEFEGUA and the Community Studies and Psychosocial Action Team (ECAP). Together these Fund grantees have stood by La Puya, helping them create security protocols and providing critical psychosocial support. For example, ECAP has held a firm presence in the La Puya camp, documenting abuses, accompanying camp members on their trips to the city for advocacy or to court, and mediating conflict. The group also provided counseling for resistance members, helping them process the trauma they experienced.

In May of 2014, tensions around La Puya boiled over. The police threw rocks at the encampment, driving the demonstrators away long enough for some of the company’s machinery to pass. The leaders of La Puya received death threats. The mayor himself falsely accused them of kidnapping him, resulting in their arrest and several months in prison awaiting trial. With support from the Fund, ECAP helped the leaders hire lawyers while UDEFEGUA provided much-needed protection for their families. When the trial came, the prosecution had no case, and the leaders were freed. Domingo Baltazar, from Santa Eulalia, poses for a photo at the La Puya peaceful anti-mining resistance camp. Mr. Baltazar is a civil society leader in Santa Eulalia, Huehuetenango, a member of the Council of Mayan Peoples, and a traditional authority of the Q’anjobal people. He has spent over one year in jail from 2015 to 2016 as a reprisal for his activism while awaiting trial for allegations that were later dropped. Photo by James Rodríguez.

During my time in La Puya, I also met with the Environmental and Social Legal Action Center of Guatemala (CALAS), a group of lawyers that took up the community’s case against the mining company. With their expertise, the farmers successfully sued the company in 2015. As it turned out, the company had submitted an environmental impact statement that failed to mention water use—a glaring omission given that cyanide leaching requires large amounts of water, and the mine was to be located in a relatively dry part of Guatemala. CALAS estimated that the mine would use up to 100% of the water in the local river near the mining site. This would leave area communities with next to nothing for irrigation, drinking, or washing, and what would be available would be laced with dangerous chemicals. Thanks to the persistence of the communities and of CALAS, the Guatemalan Constitutional Court invalidated the mining permit based on the faulty impact statement.

Like many of the stories I heard during the trip, the story of La Puya demonstrated the power of giving grassroots human rights groups flexible funding so that they can do what they do best—fight for their communities. It’s why the Fund was started, and a model that makes the Fund unique.

The Fund’s logic for prioritizing grassroots grantmaking that is flexible and responsive is straightforward: because grassroots groups are led by members of the communities they serve, the issues they tackle reflect the real needs of local people. Meanwhile, unrestricted funding allows them to remain adaptable, shifting strategies as needed in response to changes on the ground. And when these groups face emergencies like death threats or trumped-up criminal charges, the Fund delivers additional emergency grants to help keep them safe.

At La Puya, I saw the tremendous impact Fund grantees have on people’s lives. Due to the corrupt nature of Guatemala’s government, the communities I met are still battling the mine. But the Fund has shown me that with sustained support, they can win—and I’m proud to be a part of those victories.